There’s a fresh sparkle in the air, we’re forgetting the harsh winter cold and the snow. We’re delighted to share with you all the wonderful open-door activities that will turn your Easter 2018 into a sweet memory to carry with you forever. By the sea or in the Apennines? Whatever your mood!

A thousand slow activities fill the Riviera spring. Walks in the pine forest, bike rides with all the family on tracks leading to the salt pans, parks or historic towns, finishing on the beach looking up into a sky filled with kites. The amusement park and nature reserve are open, gardens and flowerbeds become splendid outdoor displays. And for those who like active holidays. For those who love nature it’s time to stay at the Miramonti Hotel, where you can leave by bike towards the hills of the Romagna hinterland on the tracks of cycling champion Marco Pantani, whose greatest triumphs were on the Apennine mountain passes in Emilia Romagna.

Spring is the perfect season for exploring the wealth of culture in this land of good living, its cities full of art and the jewels they contain.

Ravenna, with its eight extraordinary sites listed by UNESCO as World Heritage sites, is an unmissable destination for the incomparable beauty of its mosaics.

Rimini, a true crossroads of Roman history, with its Renaissance palaces and legendary figures like Federico Fellini. Offers you the magnificence of the ancient Tiberius Bridge, the Domus del Chirurgo, the Sigismondo Castle, the Fulgor cinema and the narrow streets of San Giuliano, in the footsteps of Fellini.

Cesena, where Malatesta Novello’s humanist Library is preserved untouched, with its illuminated codexes and manuscripts collected by the Lord of the era.

A thousand ideas for a spring break in Romagna. And all in the knowledge that always, after a visit to the area’s wonderful historical, natural and cultural sites, you’ll return to the pleasure of a relaxing immersion in wellness in the La Dolce Vita SPA at Batani Select Hotels. 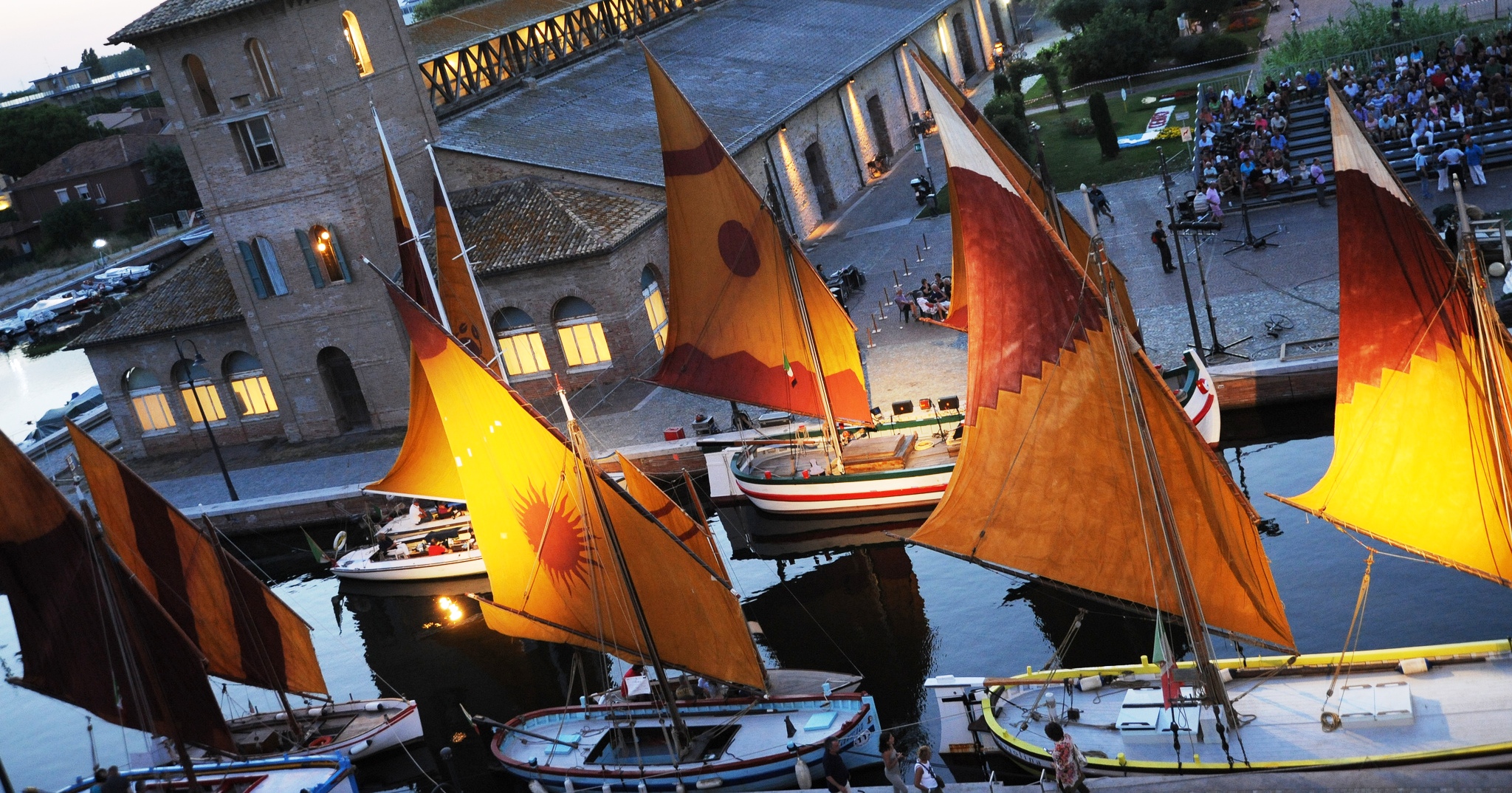 The floating section of the Maritime Museum, with eleven ancient boats in the water, their coloured sails reflected in the canal port designed by Leonardo da Vinci; and the land section where you can learn about materials and techniques used by man over centuries of navigation, and test your skill with knots to find out if you’re a true sea dog.

The Spazio Pantani is first and foremost a great act of love for the cyclist nicknamed Il Pirata. The museum houses the entire Pantani world: his trophies, his bikes, books and testimonies of his epic adventures. A visit here will bring back all the excitement of his ride to victory.

Leonardo’s Canal Port with its people, its bars and traditional workshops, the fishing boats moored at the quayside. Take a walk here at any time of day or evening, breathing deeply of the salty air and imagining Leonardo da Vinci getting to grips with a new invention or another idea inspired by the landscape and the unparalleled beauty of the sea.

Piazza delle Conserve is a timeless spot, almost hidden in the maritime town. Surrounded by fishermen’s low houses, the square owes its name to the two large ice-houses which were once used to preserve fish. In summer you can find small fruit and vegetable stalls here, and a little market selling jewellery, as the locals sit outside to enjoy the evening cool. It’s a romantic spot for a stroll.

Piazza Spose dei Marinai: watch the distant sea next to a sculpted group who depict the daily wait for the fishermen’s return. The setting sun turns the fishing huts along the water’s edge pink: today these are gorgeous and trendy loft apartments, but they were once huts on stilts for net fishing.

Torre San Michele: climb to the top of Torre San Michele and you’ll be rewarded with a breathtaking view. On one side is the sea, and the eye follows the Romagnola coastline from the great dark green crown of the pine forest to the Quadrilatero, Cervia’s most ancient quarter, with the low houses of the salt workers, illustrating the history of the tower, built for defence against the Turks, Saracens and brigands seeking to steal the salt.

The Salt Pans, a nature reserve and port at the south of the Po Delta, is a very special place in a unique habitat, an extraordinary ecosystem and nesting place for numerous bird species. You can explore the salt pans with a tour in an electric boat or a guided walk; or have the unique experience of being a salt-maker for a day, with an initiative organised at the Salina Camillone by the Gruppo Civiltà Salinara, and learn about the traditional harvest of salt. Discover production times and methods and see the salt glittering in the sun after harvesting, a special experience and a unique memory.

The Suspended Carpet at the foot of Torre San Michele. This fountain was designed by Tonino Guerra in homage to Cervia salt. Created by mosaic artist Marco Bravura, the fountain looks like a flying carpet made of marble and glass tiles, upon which are two heaps of white salt.

The Measure Stone in the square still known as Piazza delle Erbe. Here, textiles were measured using the “passo”, a kind of early ruler, and the size of paving stones was checked against the “quadrè”. The Measure Stone, dated 1636, indicates all the measurements that had to be respected by residents of Cervia and visitors to the town.

Musa, the Salt Museum: in the warehouses facing onto the quayside, the ancient methods of salt processing are illustrated by a salt worker, along with the tools used for the manual harvesting and the characteristics of the product: sweet salt of Cervia, a Slow Food Presidium. The period photographs reveal a bygone world and the origins of the salt-making civilisation.

The fabulous amusement park Mirabilandia awaits you and all the family, with record-breaking attractions, adventures, shows, wonderful themed areas for adults and children and plenty of special offers to give you even more fun.

High-class shopping in Milano Marittima is as alluring and attractive as ever, with all the latest trends; this is the glam destination of the Riviera. Among flower-filled roundabouts and tree-lined avenues, give in to the temptation of fashion boutiques and famous jewellery brands.

Take a dip in art at the Vialetto degli Artisti along the bank of Milano Marittima’s canal. Designers, creatives and artisans come here from all over Italy to display their work. At either end – Viale Matteotti and Viale 2 Giugno – illuminated white gateways welcome visitors to this remarkable walk among art.

Travel by canoe on the silent waterways between the sea and the salt pans. Here the true protagonist is nature, the luxuriant vegetation and the rhythm of the paddles joining the sounds of the surroundings. And if the trip is at night with a full moon, it’s even more magical.

In the ancient pine forest, Milano Marittima’s own green lung, you can explore the paths with Nordic Walking, using poles: it’s invigorating in the morning, relaxing at sunset, and a simple replacement for your daily run, which you don’t want to miss while on holiday. 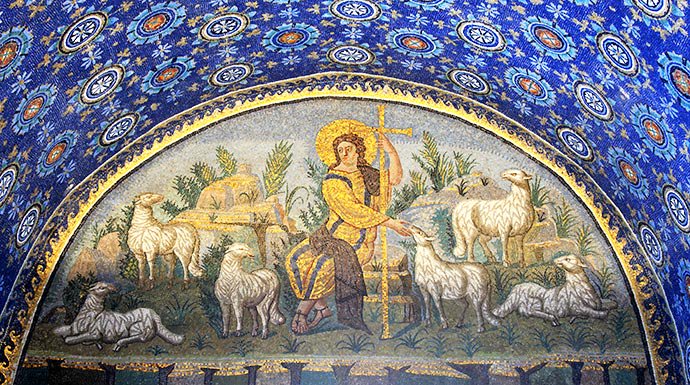 Ravenna‘s fascinating history saw the city serving as capital three times: of the Western Roman Empire, the Ostrogothic Kingdom and the Byzantine Excharate. This incredible centre of art boasts eight monuments listed as UNESCO World Heritage Sites for their exquisite centuries-old mosaics; the culture and beauty of San Vitale, the Mausoleum of Galla Placidia, Santa Apollinare Nuovo and the Mausoleum of Theoderic are the main sights.

The newly-rennovated Fulgor is the historic cinema in Corso d’Augusto where Federico Fellini saw his first films and which later became a star of his own works. It’s a Fellini icon and an unmissable stop on a Fellini-themed tour of the heart of Rimini.

Take a walk with Federico Fellini in Borgo San Giuliano, the ancient fishing district with its little squares, narrow streets and low, colourful houses. You can follow a route guided by murals on the walls of the buildings and find out which of them are dedicated to the great director and to the movie star Giulietta Masina.

Dive into history by crossing the Tiberius Bridge, built by the Romans in 14 AD. This is the start of the Via Aemilia, a consular Roman road that led to Piacenza. See the wonder of its ancient Itstrian stone blocks and its magnificent arches, which a legend says were built by the devil. As you stroll along the banks of the river Marecchia, among the lawns and walkways of the Park area, you can admire the double view of the bridge reflected in the water.

The Antica Pescheria, or ancient fish market, in Piazza Cavour, with its long marble benches is where traders sold fish and “poveracce”, as clams were known in this area. Dating back to 1746, the building consists of a lovely colonnade and the marble benches, and is one of Rimini’s main attractions, being surrounded by numerous bars, inns, pubs and restaurants of all kinds.

The Tempio Malatestiano is testimony to the magnificence of Sigismondo Pandolfo Malatesta and an outstanding example of Renaissance culture. Work on the church began in 1450, and the exterior is by Leon Battista Alberti. Inside there is a Giotto crucifix and a fresco by Piero della Francesca depicting Sigismondo kneeling at the feet of San Sigismondo.

The Surgeon’s House in the archaeological complex of Piazza Ferrari. Among the most important finds here is a collection of 150 surgical instruments which left no doubt as to the identity of the house’s owner: a doctor. It appears that Eutyches – this was his name – came from Greek lineage and, as often occurred in antiquity, trained on the battlefield. Indeed, the instruments were used primarily for bone traumas and wounds, which gives the impression that Eutyches was a military surgeon.